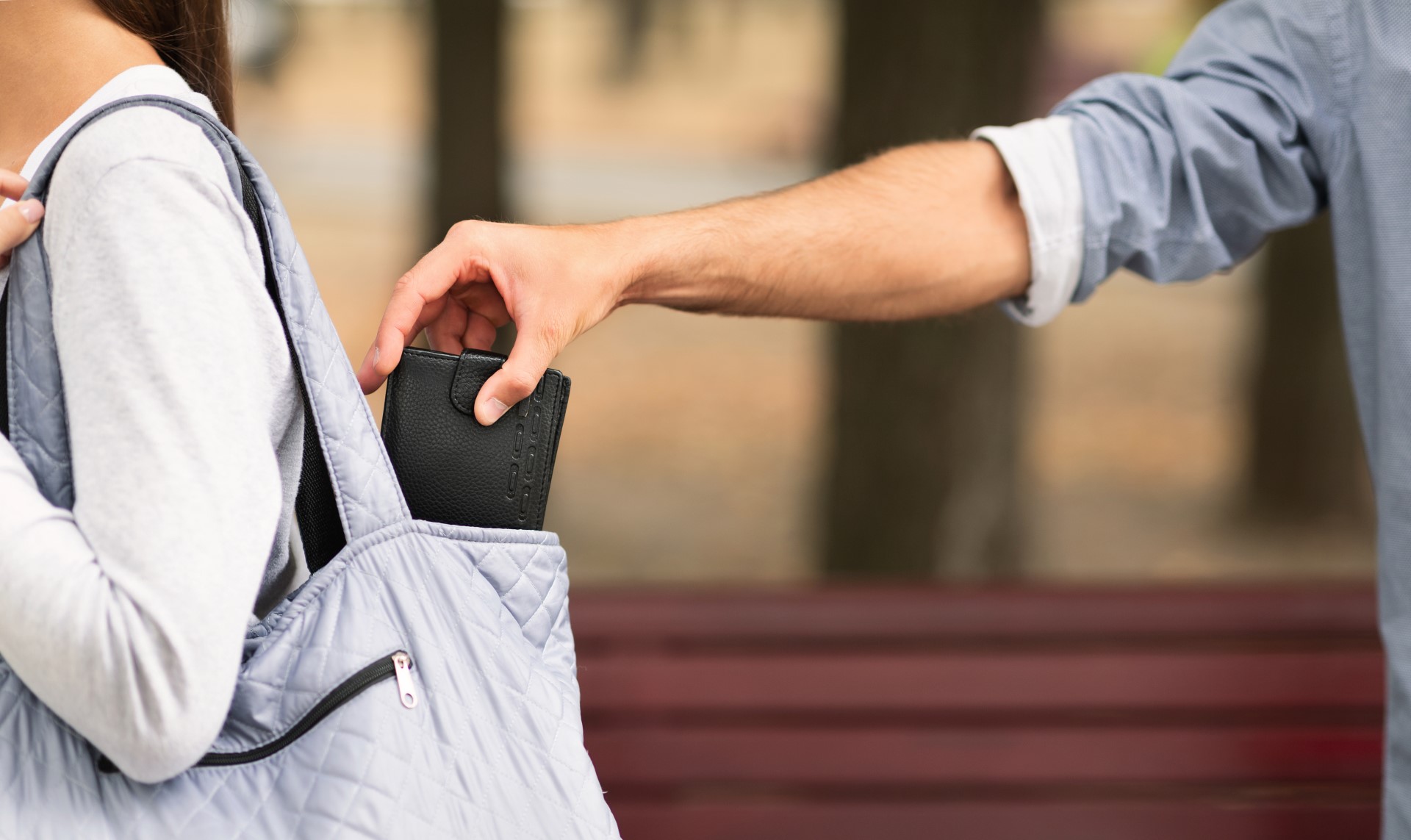 According to an FBI report, since 2014 the violent crime rate has continued to increase in the United States.1 Sadly, victims of crime are targeted because of their age and gender.

What seemed like an ordinary trip to the grocery store turned tragic for senior citizen Jean Sutton. What was usually a crowded parking lot was quiet, as it was just the day after a holiday.

Parked less than 100 feet from the entrance of the store, Jean felt like she was relatively safe. She still had that uncomfortable feeling of being watched as she reached in her purse for her keys, when all of a sudden she heard a man's voice.

In a split second, he grabbed Jean's purse and threatened Jean, "Drop of the purse or you're gonna get hurt!” Luckily, she remembered she had her Safety Siren attached to her keys.

"I quickly reached for the alarm and pulled the pin."

"Immediately my Safety Siren started blaring, louder than anything I had ever heard. Panicked, the attacker dropped his grip on my purse and started running. Within seconds I saw a half a dozen people running out of the grocery store to my aid. Even through the thick glass windows, the people clear in the back of the store were able to hear my Safety Siren."

Jean’s Safety Siren helped prevent what could have been a much more terrifying situation. Others in America aren't always so lucky...

According to the FBI, in 2018 the number of property crimes reported that were actually solved or cleared was ONLY 18%.2 This is an astoundingly low number and doesn't inspire much confidence that if you are the victim of a violent crime you might actually recover your belongings or get justice.

After her attack, Jean bought the 1TAC Safety Siren for everyone in her family, including the men, as crime affects EVERYONE. The Safety Siren is the perfect size and can be attached to keys, purses, backpacks or carried in a pocket. 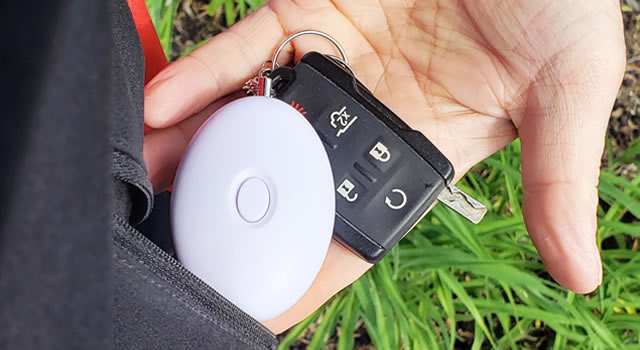 "I was so grateful to have my Safety Siren with me that I went out and bought 10 more for everyone in my family. Now I can have peace of mind when I’m not with them."

What is a Safety Siren?

The Safety Siren is personal safety device that activates an alarm by pulling a pin from the body of the device. Smaller that a golf ball, the Safety Siren produces 10 Decibels of ear piercing alarm. That’s as much sound as a jet plane taking off, thwarting off any unwanted attackers and bringing attention to your distress.

Even better, is that you can keep using the Safety Siren! It's not a one-time use like pepper spray. What a perfect solution to awkward and messy one-time use safety devices!

John Paulson created the Safety Siren almost twenty years ago, as he noticed crime increasing in his hometown near Detroit. While Detroit was once a booming auto town, things were starting to change and the signs of recession were showing as people were losing their jobs and the crime rates started to slowing increase.

After his young daughter was nearly kidnapped while walking home from school, John decided that rather than having to worry about the logistics of picking her up from class every day and potentially losing his job, there had to be a way to protect her without arming her or standing over her shoulder at every minute.

After hours of drafting ideas and concepts, John came across the idea of creating Safety Siren from watching, ironically, a show about wild animals in Africa and how they respond to humans. What scientists had discovered is that even though lions and bears are much more powerful than humans, these natural predators actually fear humans because of the noises they produce. 3

NOISE was his solution. If the human noise is terrifying to animals, what sound would be terrifying to humans? He had to create a sound loud enough to scare away attackers AND draw the attention of others. Thus, John ran down to his favorite electronics store and picked up pieces to assemble items to find the ‘noise’ that would terrify humans.

Since then, the Safety Siren has been retooled and re-imaged producing even MORE noise, and is much simpler to use than ever before. The new, improved Safety Siren in in the hands of thousands of Americans has generated thousands of calls and letters to John personally thanking him for his brilliant invention.

"I never get tired of it," he said a smiling. "It feels great to provide something that not only provides a sense of security but is actually working to help prevent crime, and is actually helping to decrease crime in some areas."

Not just for seniors and children...

The Safety Siren Personal Alarm has helped Americans in every corner of our great nation by providing a heightened sense of security. It has improved the lives of men, women, and children as the Safety Siren reduces their image as a target because of the confidence they exude with Safety Siren!

Police have been recommending the Safety Siren as the number one personal safety device. Not only is it safer to use than pepper spray, it is proven to be more effective as a deterrent.

In fact, Safety Siren since its launch has been selling out weekly! John has done his best to keep up with demand but his aggressive pricing model has made it extremely desirable for all families.

Safety Siren has some of the greatest customer feedback of any product we have reviewed!
I chose to purchase these for my little girls and I as a security measure for us. I work during the evening and commonly I am last to leave work. It 's nice to know I have this on my keychain in the event of some unforeseen issue! I gave the other two to my little girls with the goal that way they can prevent predators from attacking them. These are SO NOISY and simple to turn on! None of us have needed to use them, fortunately, yet when we tried them out in the house my youngest child grabbed his teddy bears to cover his ears!

So happy to have my Safety Siren. I have yet to pull the cord out of necessity, but I feel much more secure having it!

- Kim Martinez
Safety Siren saved my dog from a vicious coyote attack! I was watching TV when I heard my dog start to yelp in the back yard. I jumped up immediately and luckily had my safety Siren on my keys which were still in my pocket, I quick ran out side pulled the pin and the pack of coyotes ran off! Luckily Scooter was just a bit shocked they hadn't yet broken his skin.

-Logan James
We wanted to get a pro's opinion on the effectiveness of Safety Siren, so we talked to Sheriff John Noble. Here’s his opinion:
“The Safety Siren Personal Alarm has helped thousands of lives across America. Sadly, it’s needed now more than before. Violent crime is on the rise in 2019. But after seeing thousands of reports this year, I’ve seen a positive trend in crime prevention. At first I assumed it was because of pepper spray or stun guns, but it was actually the use of Safety Siren that prevented these crimes from being successful.”
- John Noble, Sheriff
I wanted to see (and hear) the Safety Siren...

John Paulson, brought one to our interview and handed it to us to try. Having done this I'm sure thousands of times, he asked to wait to pull the cord as he carefully placed ear plugs in his ears and offered us some as well.

Foolishly, I opted out of the ear plugs which I instantly regretted as the Safety Siren cord was pulled. It was screaming louder than anything I have ever heard and I live next to an airport! I quickly signaled to put the pin back and the device immediately quieted itself.

I immediately bought five from John on the spot! One for each of my family members and ordered another five to be shipped to my family around the country.

While I was a little concerned that the device was too easy to set off, John showed me its robust build. He showed me that the cord or button needed just the right amount of pressure to be set off and wasn't light enough to be ‘accidentally’ pressed or too hard that it wouldn't work when needed.

I then asked about battery life, in which he explained that it should be checked regularly but even if you pulled it 100 times in 3 months, it will still have plenty of battery!

How much does it cost? (And is it worth the price?)

The Safety Siren is sold by one of our favorite tactical manufacturers, 1TAC, online for $39.95 per two devices. What's is awesome is that you can actually save more when you buy more!

While the Safety Siren Personal Alarm was originally made to protect younger women and children, orders are coming in from seniors everywhere, and it is quickly becoming the most popular gift idea in 2019.

As far as value, you don't even need to use it once to make sure it’s worthwhile, because how can you put a price of safety and security? Especially when it’s protecting your loved ones!